Alright turbo-nerds, gather 'round. This one is about ricing.

I've been using Linux as my only operating system for about three years. Like most folks I was first introduced to Linux through my university classes in CS. I was impressed by Linux's package managers, and I got to see first hand how easy it was to program on a Linux computer. Soon after that a Windows update on my laptop went awry (as they usually do). I decided I had had enough and spent Christmas Eve in 2017 installing Ubuntu 16.04. 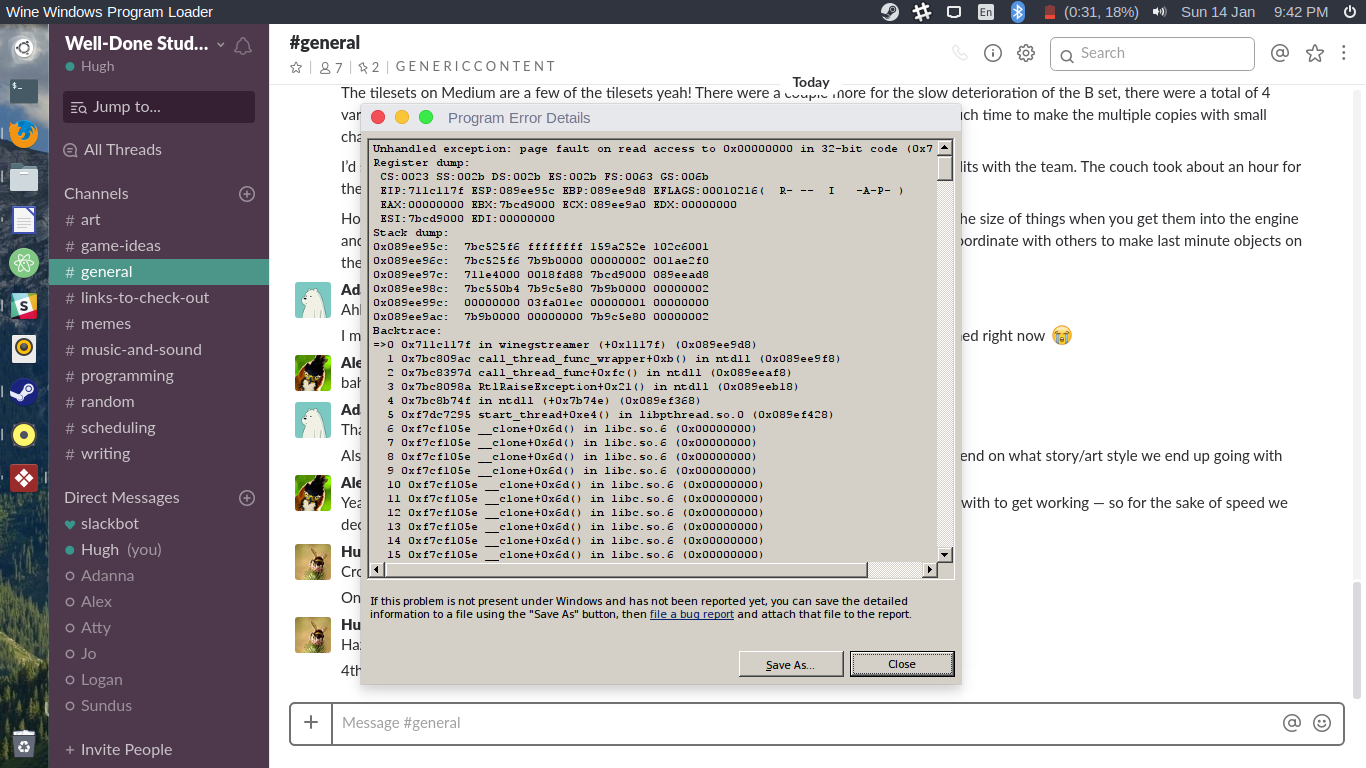 The good 'ol days (not really)

I used Ubuntu 16.04 for about 7 months, and most of that was with the Unity desktop. I still think that the Unity desktop has one of the most unique and useful designs. It is very compact -- perfect for laptops. 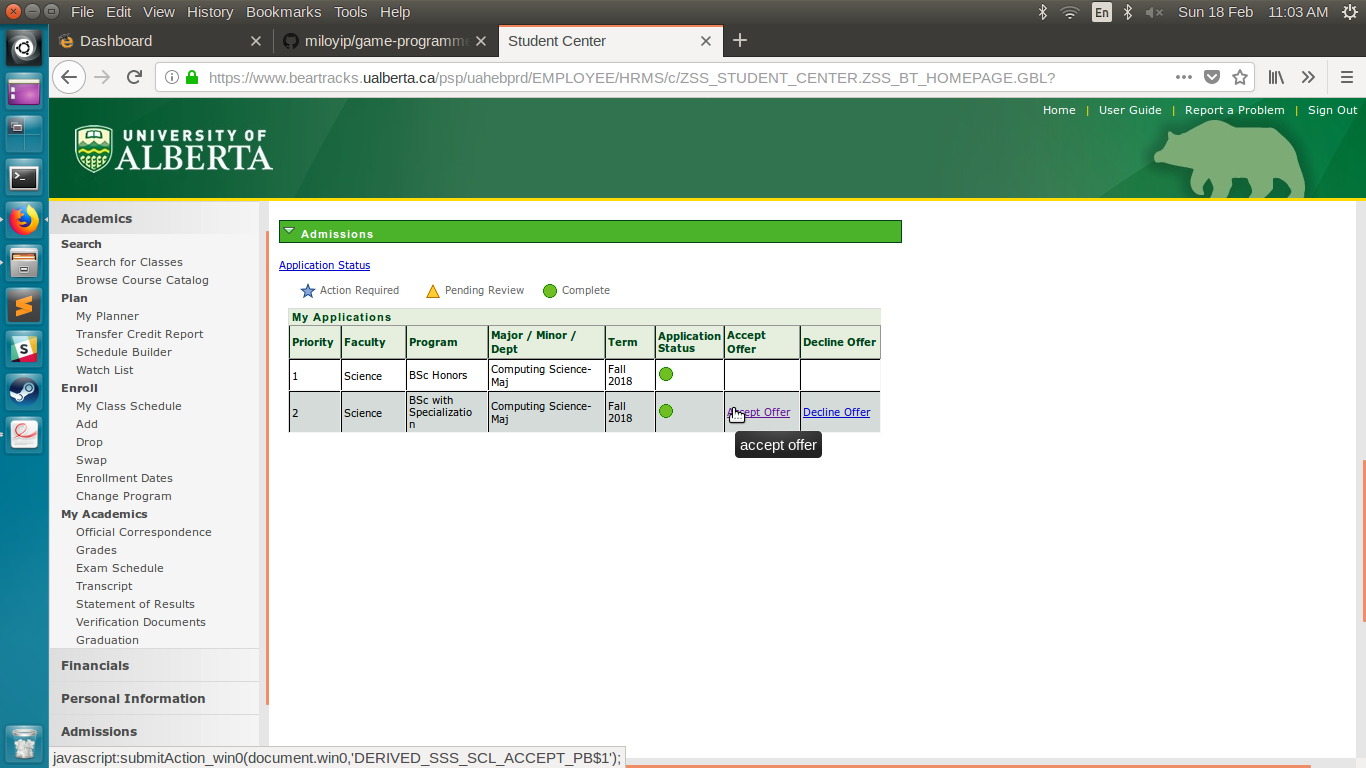 Accepting my university's offer to enter my CS program.

Having the window buttons in the top left corner of the top bar is Unity's superpower. Notice that this allows many applications to forgo the window title bar. Instead it's combined into the top bar with the window menus. I have since tried to recreate this in other Desktop Environments (DE), with lacklustre results.

At some point I decided to install XFCE alongside Unity and start messing around. 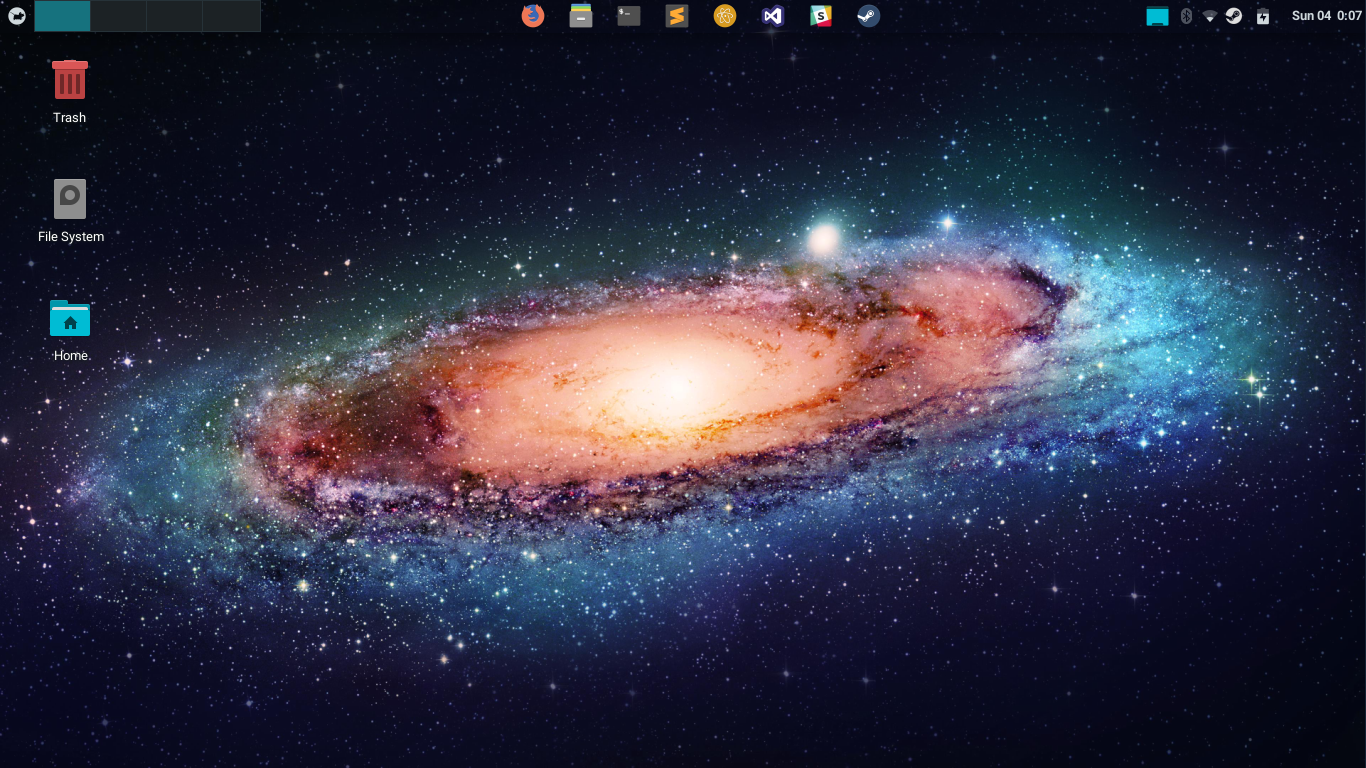 I'm all about saving screen space. Why should I have a horizontal dock and a panel when I can just have one panel? I cringe when I see someone using Google Chrome on their 13 inch Macbook, complete with toolbars. The dock alone on such a laptop takes up at least a tenth of the vertical screen space. How can you read properly with so little space? You can't.

Another reason I switched to Linux was for proper workspaces, or "virtual desktops". You can see me using them in the top left of this desktop. Linux workspaces are second to none, especially on GNOME. Even this palaeolithic XFCE setup blows Windows multitasking out of the water. 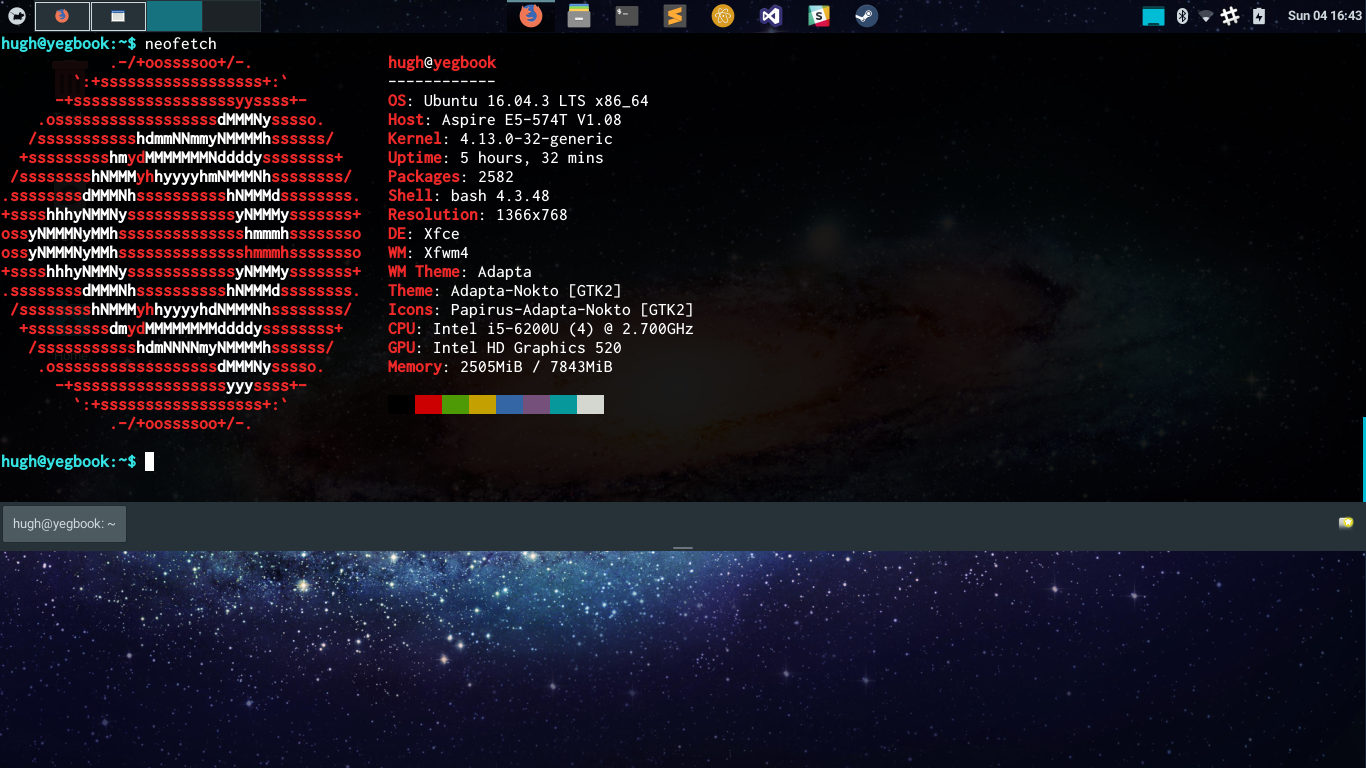 At this time I was also into pop-out "drawer" terminals. The tilde key (~) toggles hiding and showing the terminal. It is very handy, but I didn't always need a terminal, so I eventually stopped using drawer terminals. 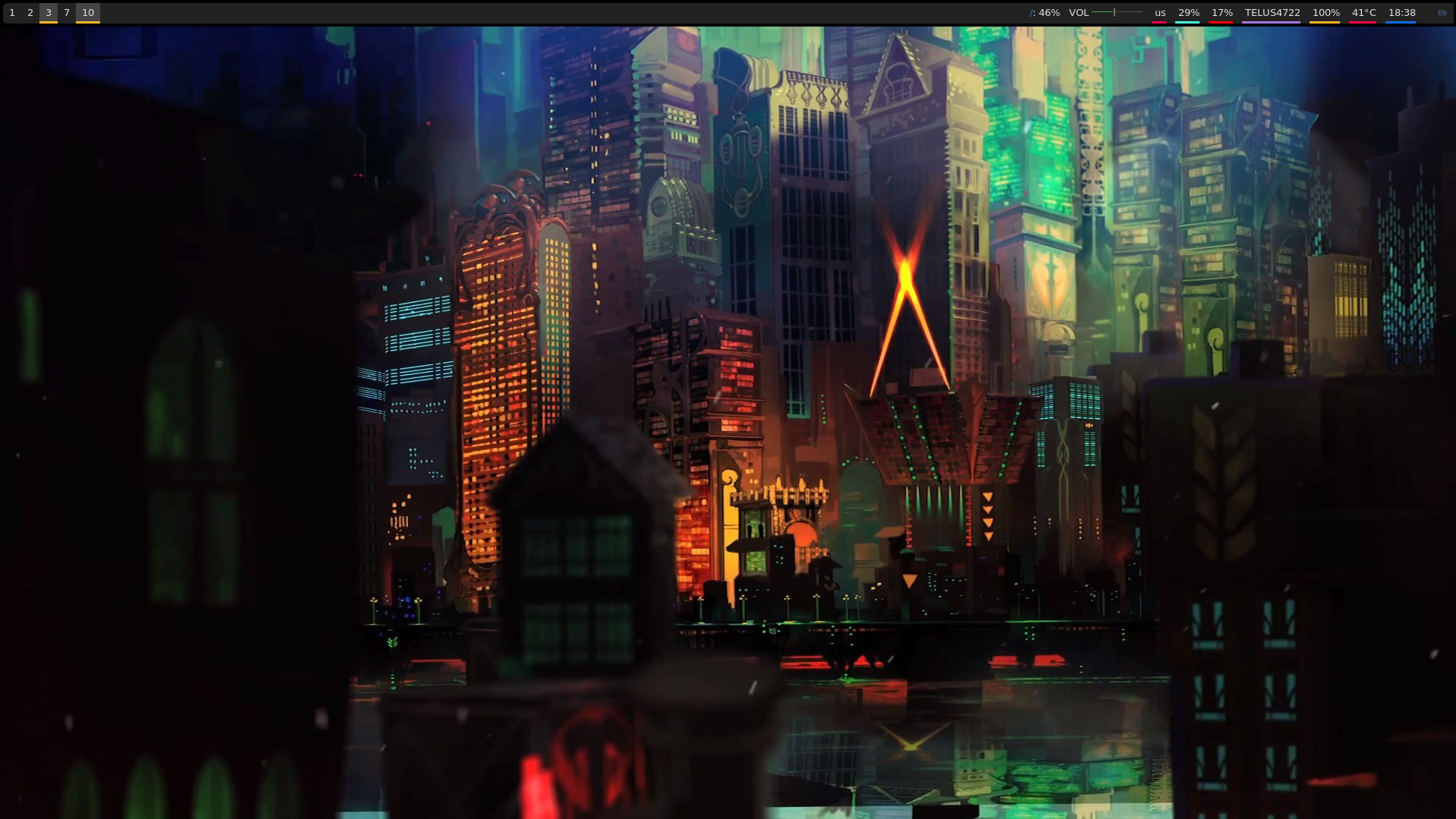 This wallpaper is from a game called "Transistor", by the way.

In summer of 2018 I upgraded to Ubuntu 18 and used GNOME for the rest of the year. Unfortunately I don't have any screenshots from that time, but rest assured it was more or less the default Ubuntu theme (which looked pretty good!). I'm still a fan of the Yaru icon theme.

At some point I took Openbox for a spin. Like i3, Openbox is very light on resources. However, it's hard to enjoy Openbox when you have to code your own taskbars and panels (that often end up breaking). I've seen people create some beautiful desktops in Openbox, but when I have work to do I need a desktop that actually works.

Wallpaper is a photo that my brother took in Jasper.

I also got an external monitor for my laptop -- a fantastic purchace.

I think what I liked most about these desktops is how lightweight they were. My laptop was not especially powerful, so I was trying to save every piece of memory that I could. GNOME at the time was fairly memory hungry; two electron apps and a browser was usually the most my laptop could handle (or one Android Studio and a browser). 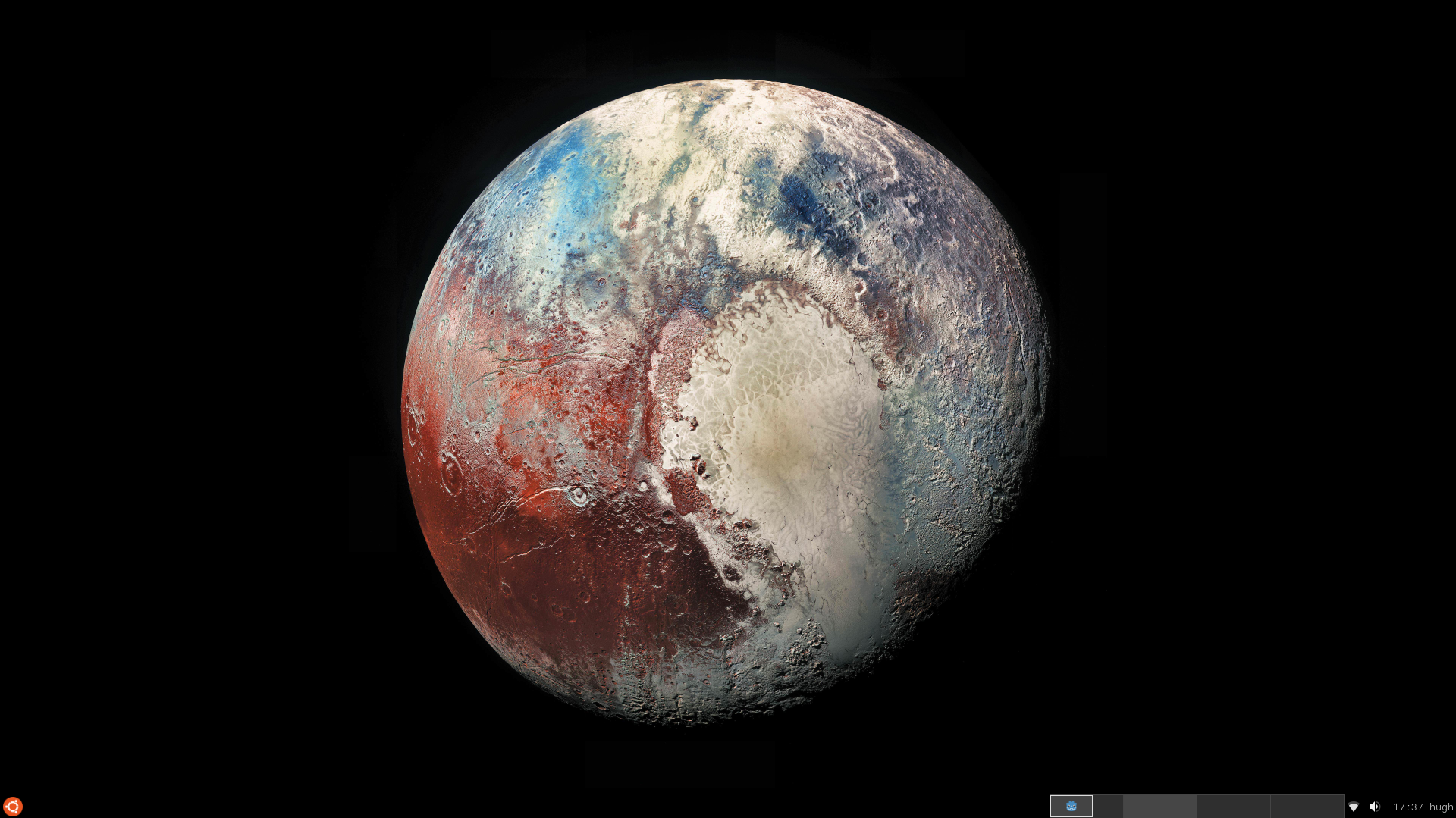 This wallpaper is a photo of Pluto, from NASA's New Horizon mission.

Visually I also preferred very clean interfaces. There's a lot packed into that taskbar but you wouldn't know it from a clean screenshot like this one.

For a few months in the summer I used Manjaro, also with XFCE. (I don't have any screenshots from then, but it was stock Manjaro.)

Manjaro is quick and snappy; I was definitely surprised. I assume that can probably be attributed to Arch Linux. The Arch User Repository is also quite impressive. However, rolling release updates turned out to be not for me. Manjaro as an organization seems somewhat, er, sketchy as well. Arch is probably one of the best operating systems ever made, but I admit it is not for me.

From a user perspective this distro is nearly the same experience as XFCE Manjaro. Of course Manjaro is faster, but I was willing to forget that in exchange for being able to use the Debian & Ubuntu repositories.

Buzz Aldrin wallpaper. Party parrot in the terminal. The "La Capitaine" icons look great in this one.

XFCE looks great when you are only taking a screenshot. But what eventually drove me back to GNOME is that XFCE does not handle graphics well. What kind of desktop has screen tearing in 2019? Well, XFCE does!

MacOS look-alikes came into fashion in 2019, and mostly still are a year later. 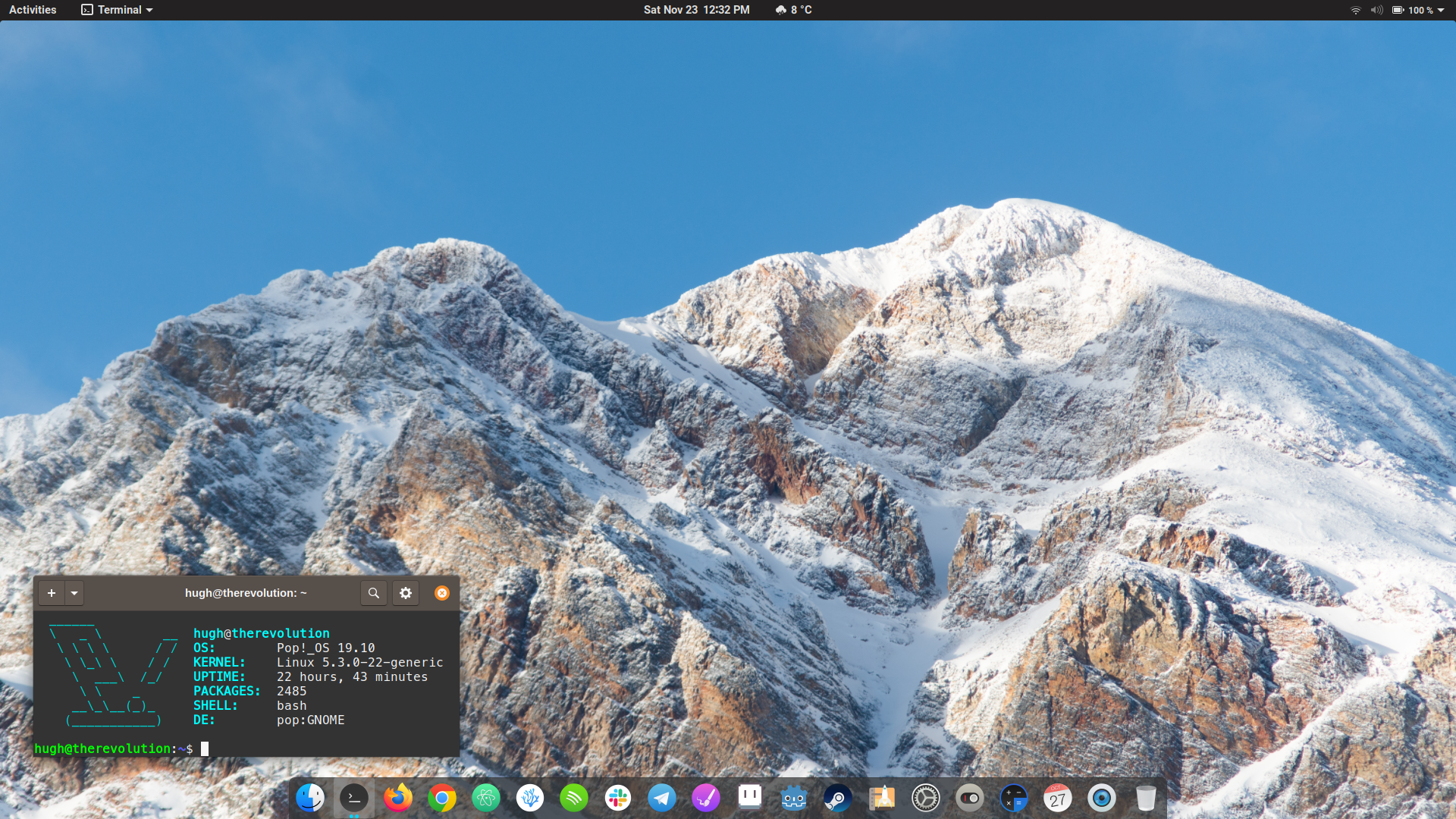 Hopping on the MacOS bandwagon. This wallpaper is a photo of Pyramid mountain in Jasper.

Pop!_OS is basically Ubuntu but better:

All of these make Pop!_OS a great operating system for Linux professionals and enthusiasts.

GNOME has come a long way in the last two years. Ubuntu 18 was good, but it was still a bit rough. With GNOME version 3.34 and beyond it has been much more stable, efficient, appealing, and feature-filled. 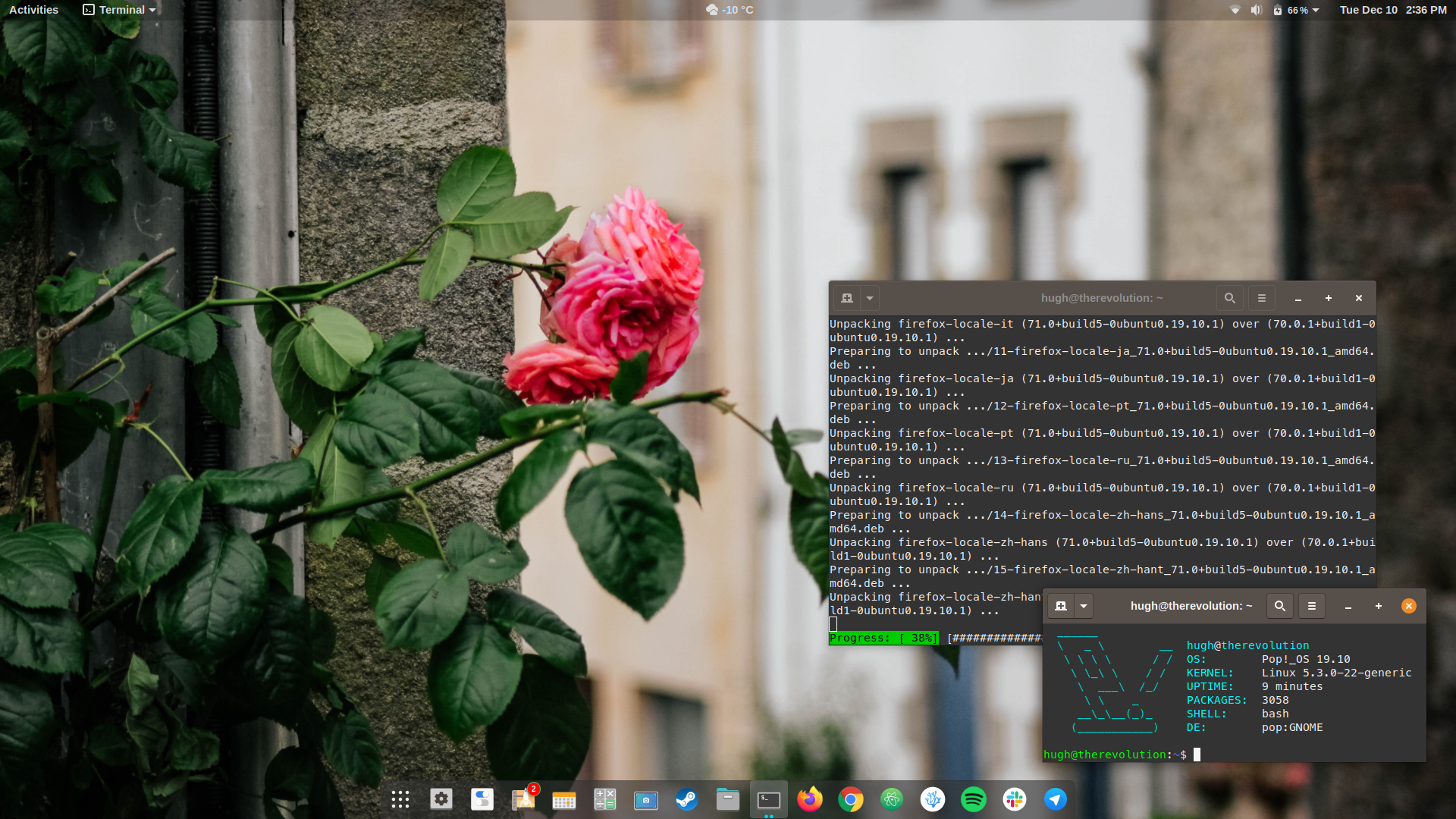 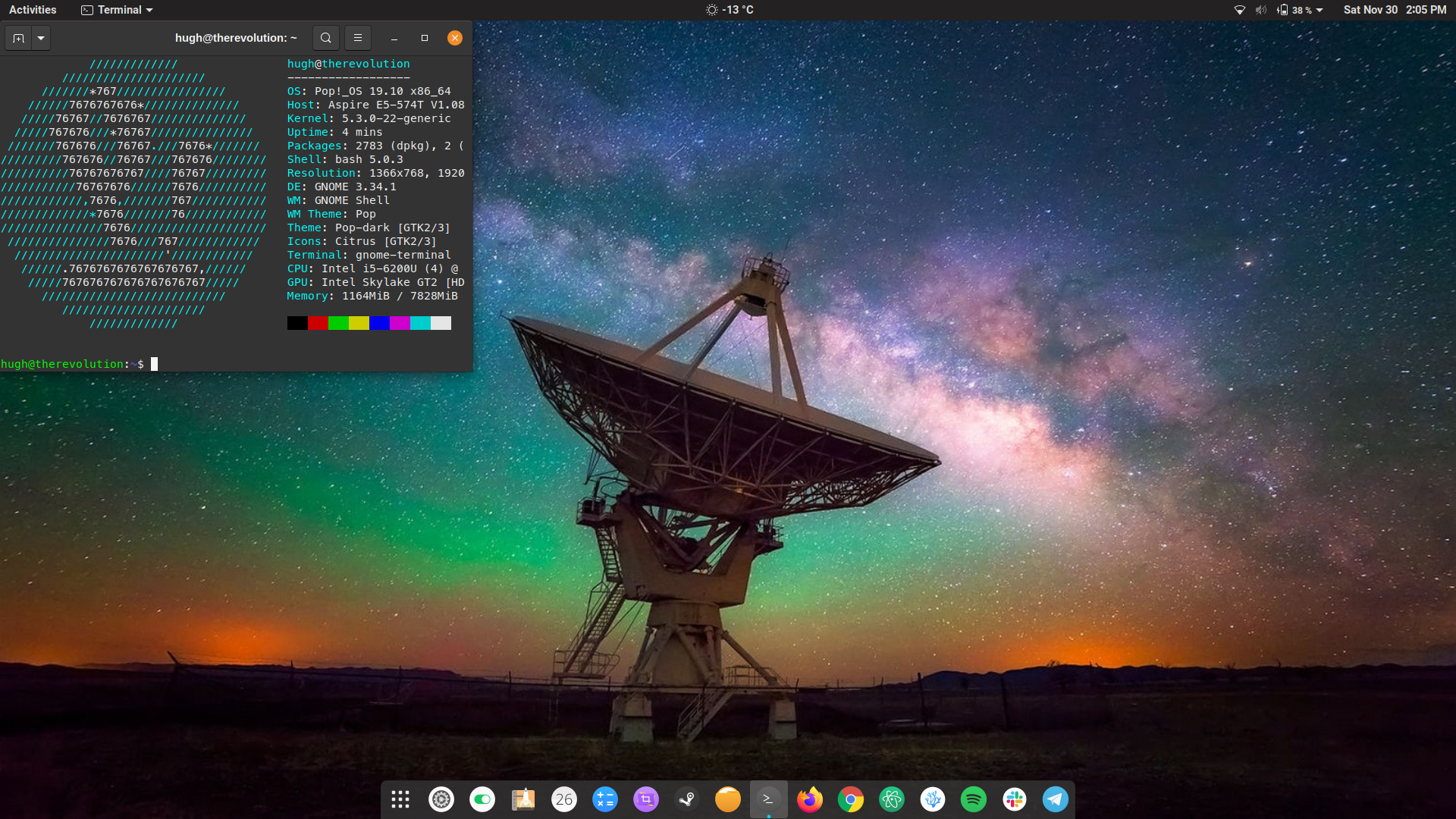 During the winter break in 2019 I saw some very nice KDE desktops. KDE was the last major DE that I hadn't tried yet, and the trendy Kvantum customizations looked amazing. So I hopped to Kubuntu on a whim. 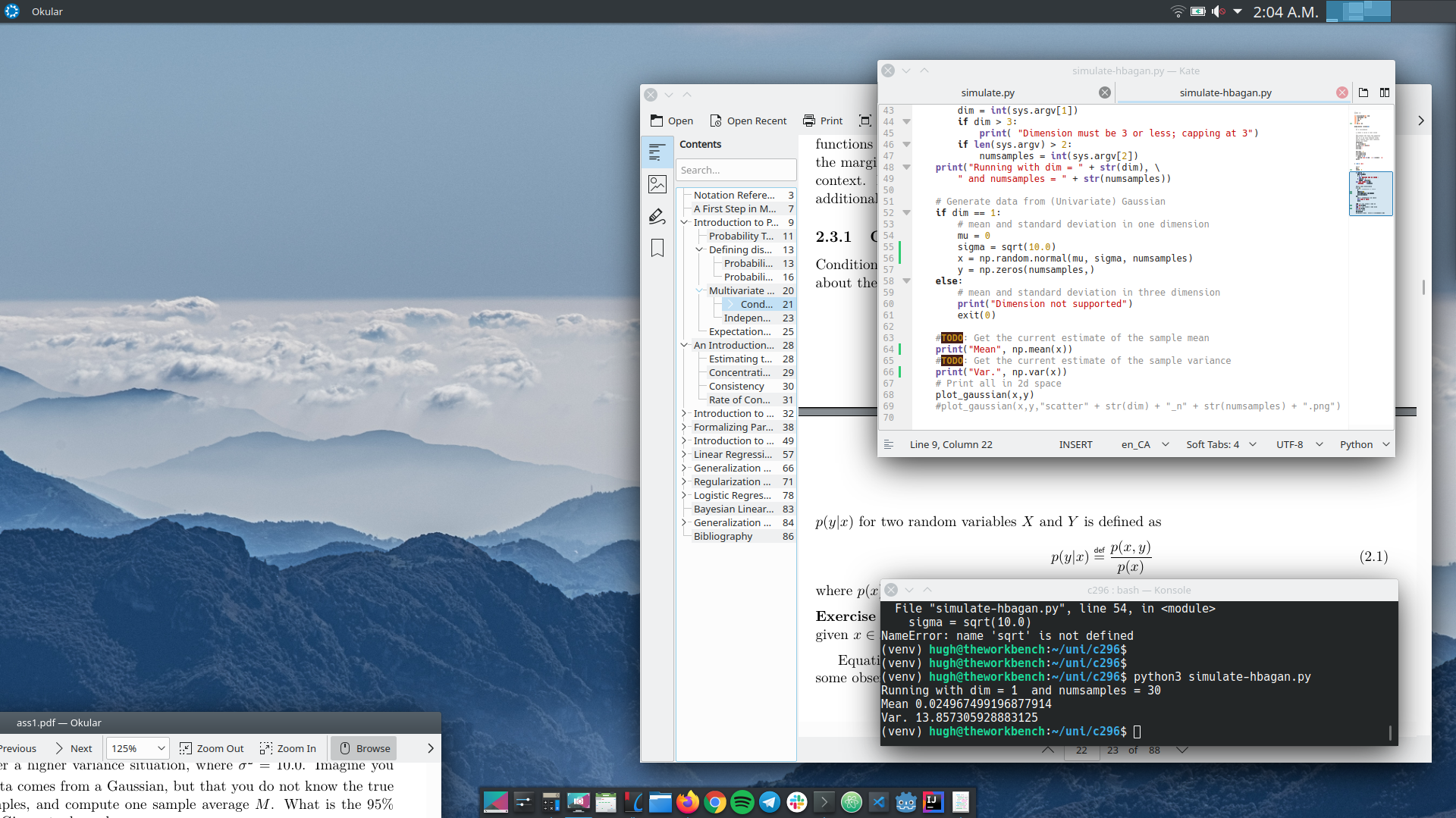 Doing my machine learning homework. I did not pass.

KDE is very customizable. But even KDE's stock "Breeze" theme looks very nice on its own. KDE has gone from being one of the most bloated DEs to using very little memory. Impressive! 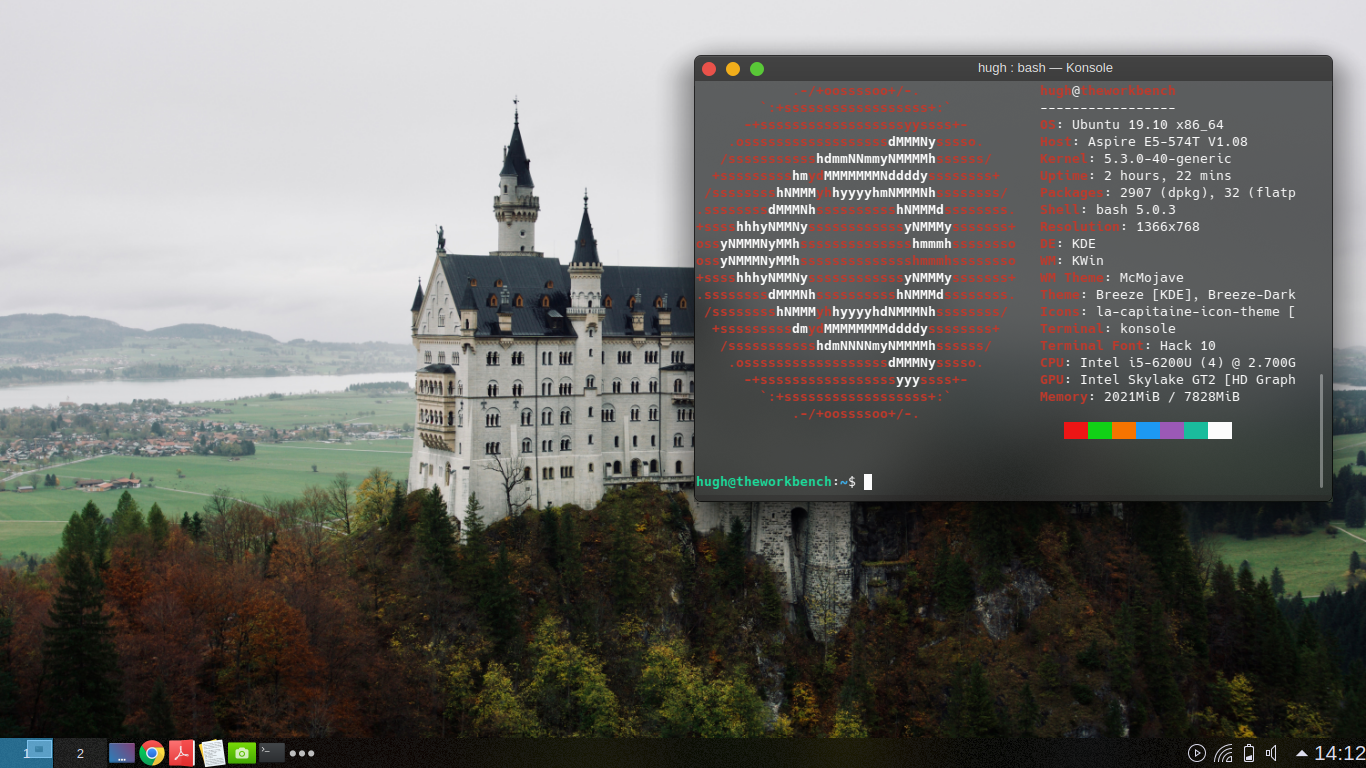 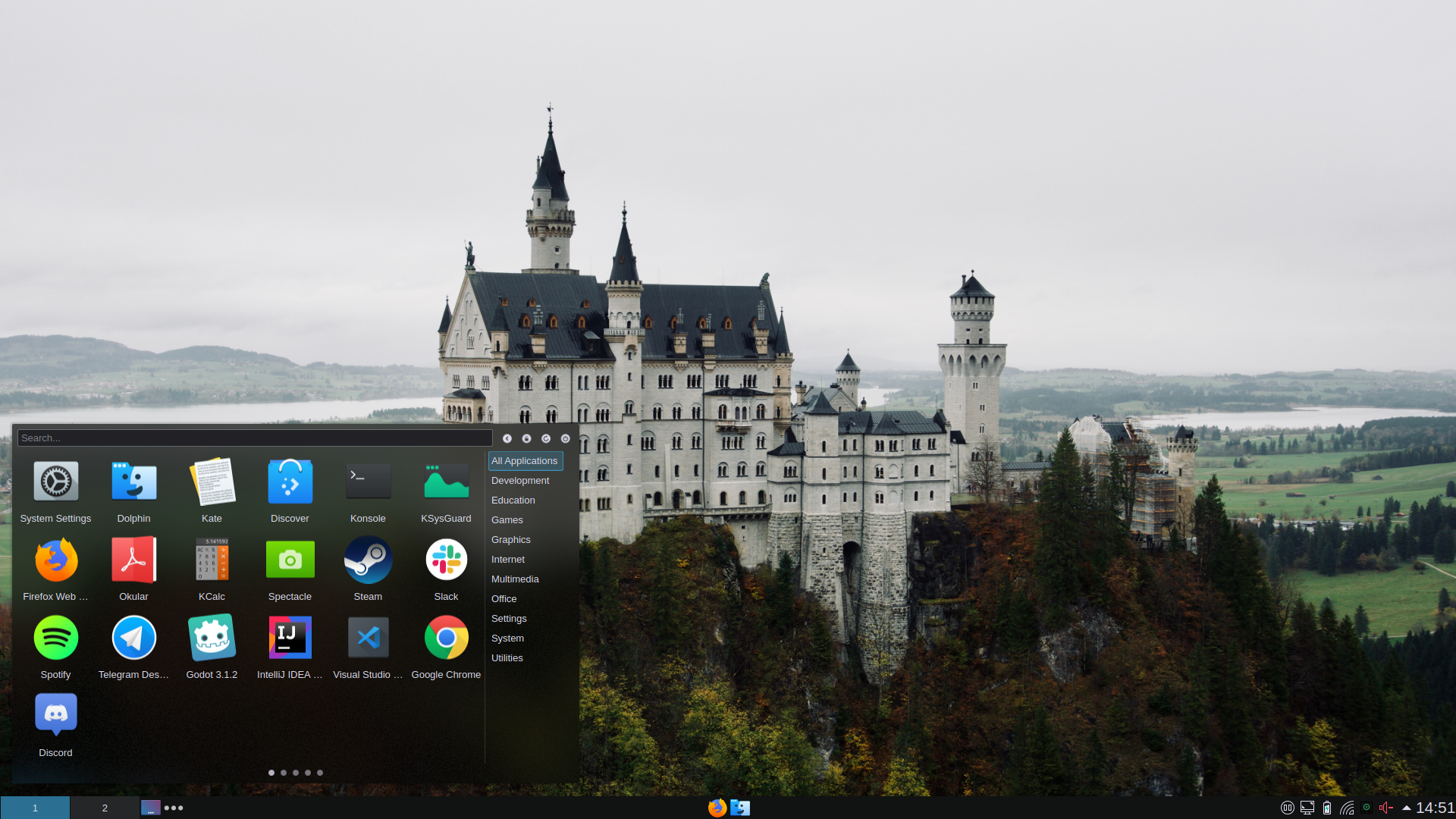 I thought this desktop looked pretty slick. But I had a few reasons to dislike KDE. The first reason being that I couldn't get Kvantum themes to work properly. But my biggest gripe is that the KDE control panel is a sprawling mess.

There are so many settings hidden in menus upon menus. For instance, if I wanted to change the wallpaper I needed to set the desktop wallpaper, the lock screen wallpaper, and the log-in wallpaper, all in completely separate parts of the settings. KDE is very robust, but there isn't enough order to unite all of its features together. It's not a cohesive experience.

My laptop's battery life on KDE was not nearly as good as it had been on Pop!_OS, either.

When the new long term release of Pop!_OS came out, I was ready to switch back again. 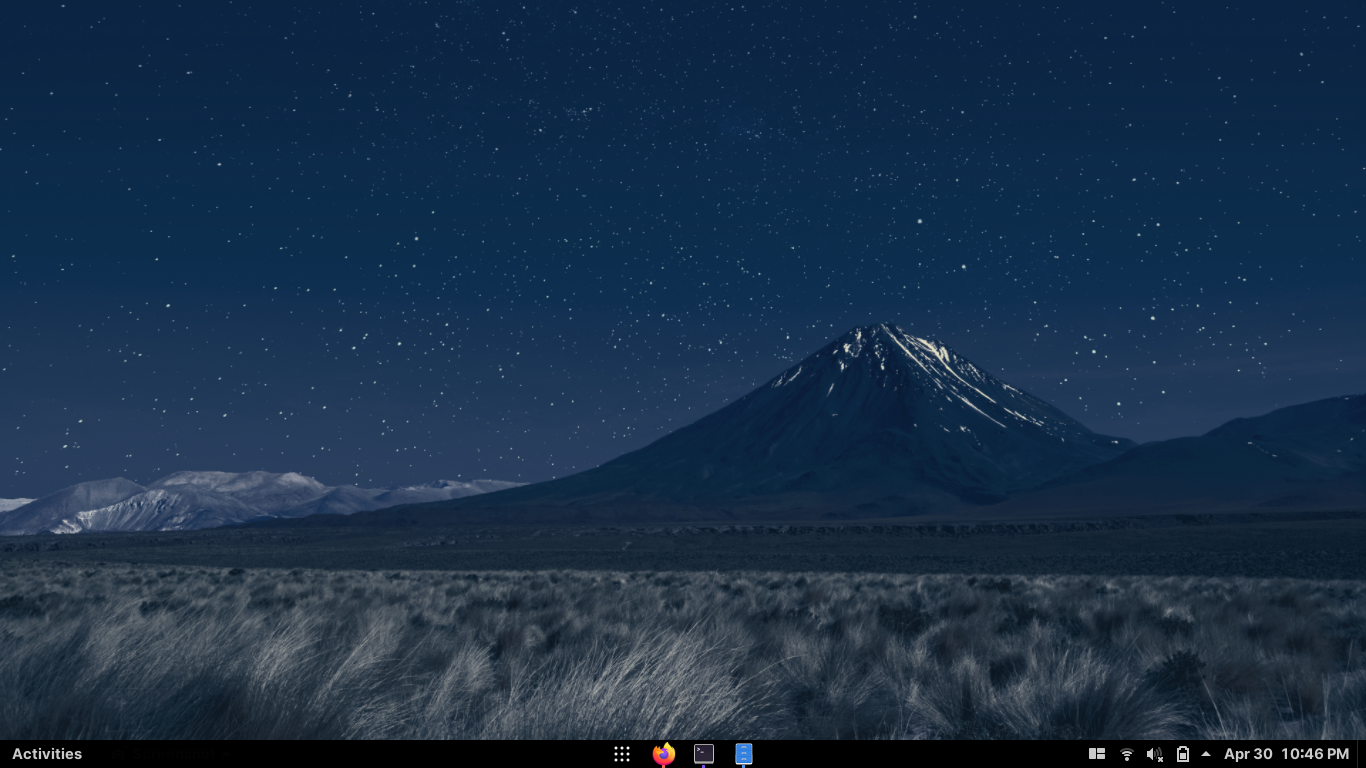 This particular theme automatically switches between light mode and dark mode depending on the time of day!

In May of 2020 I was finally able to get a decent desktop computer. And you bet I put Pop!_OS on it! As I said earlier, GNOME is more efficient than it used to be, but I still appreciated having hardware powerful enough to support every bell and whistle.

And call me a normie if you want, but I like the new Adwaita theme.

I used to enjoy tinkering with stuff like Openbox and XFCE, but now that I have a capable computer (and less free time) I find myself appreciating the "out of the box" experience so much more. It's truly a special time to be using Linux when you can say that everything "just works".

Here are some of my desktops from the latter half of 2020: 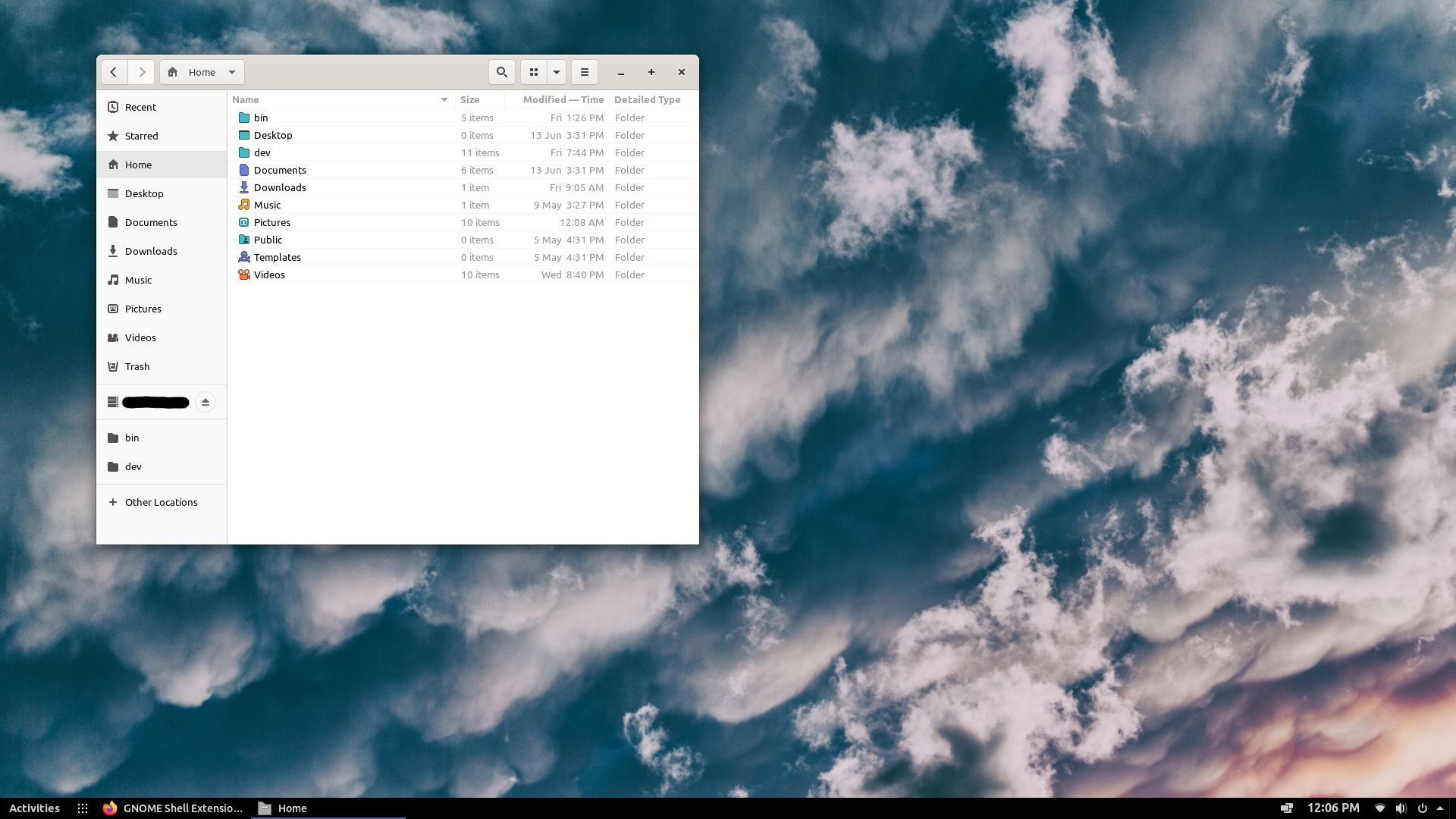 Using the dash-to-panel extension for the taskbar. Wallpaper 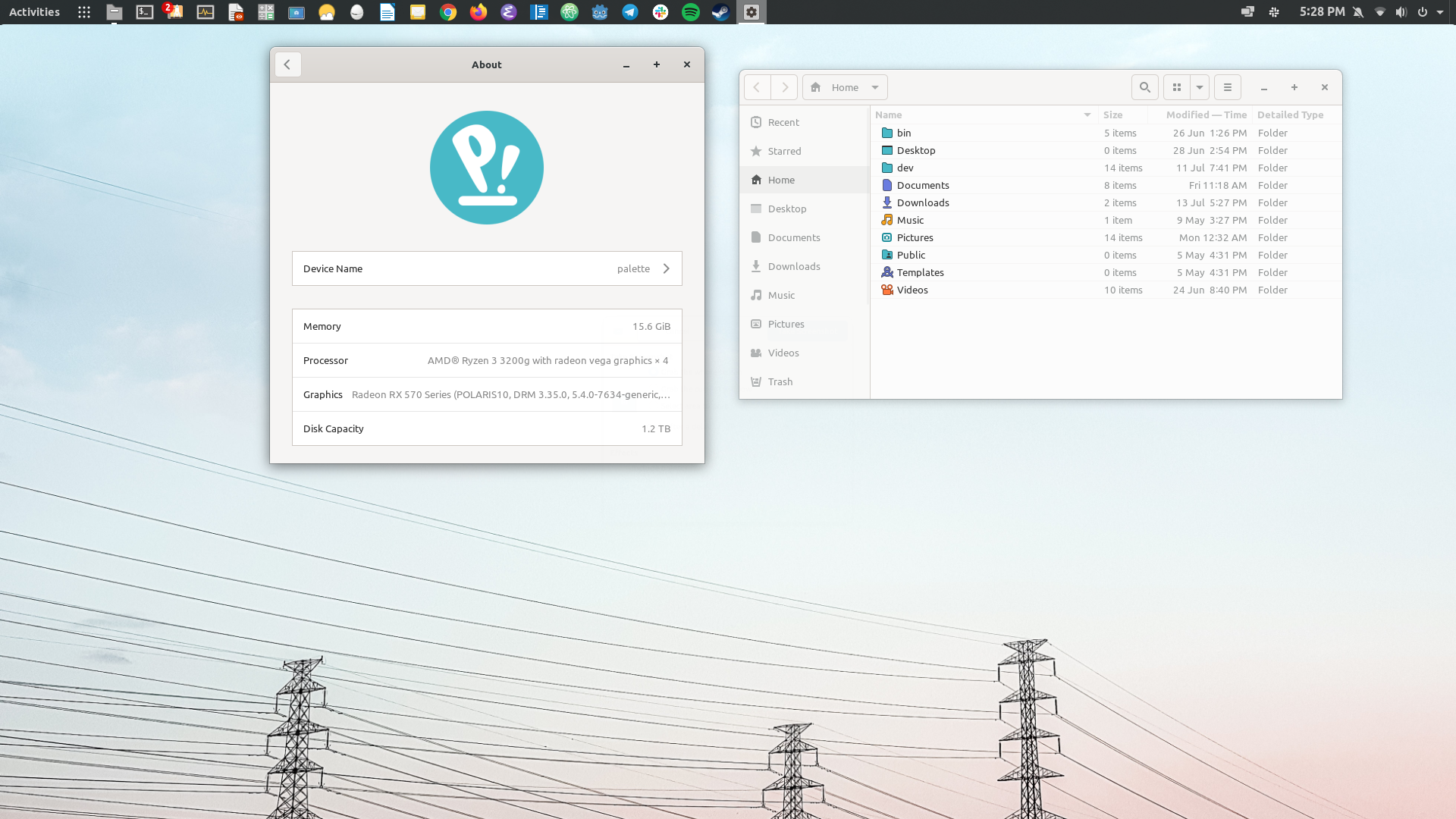 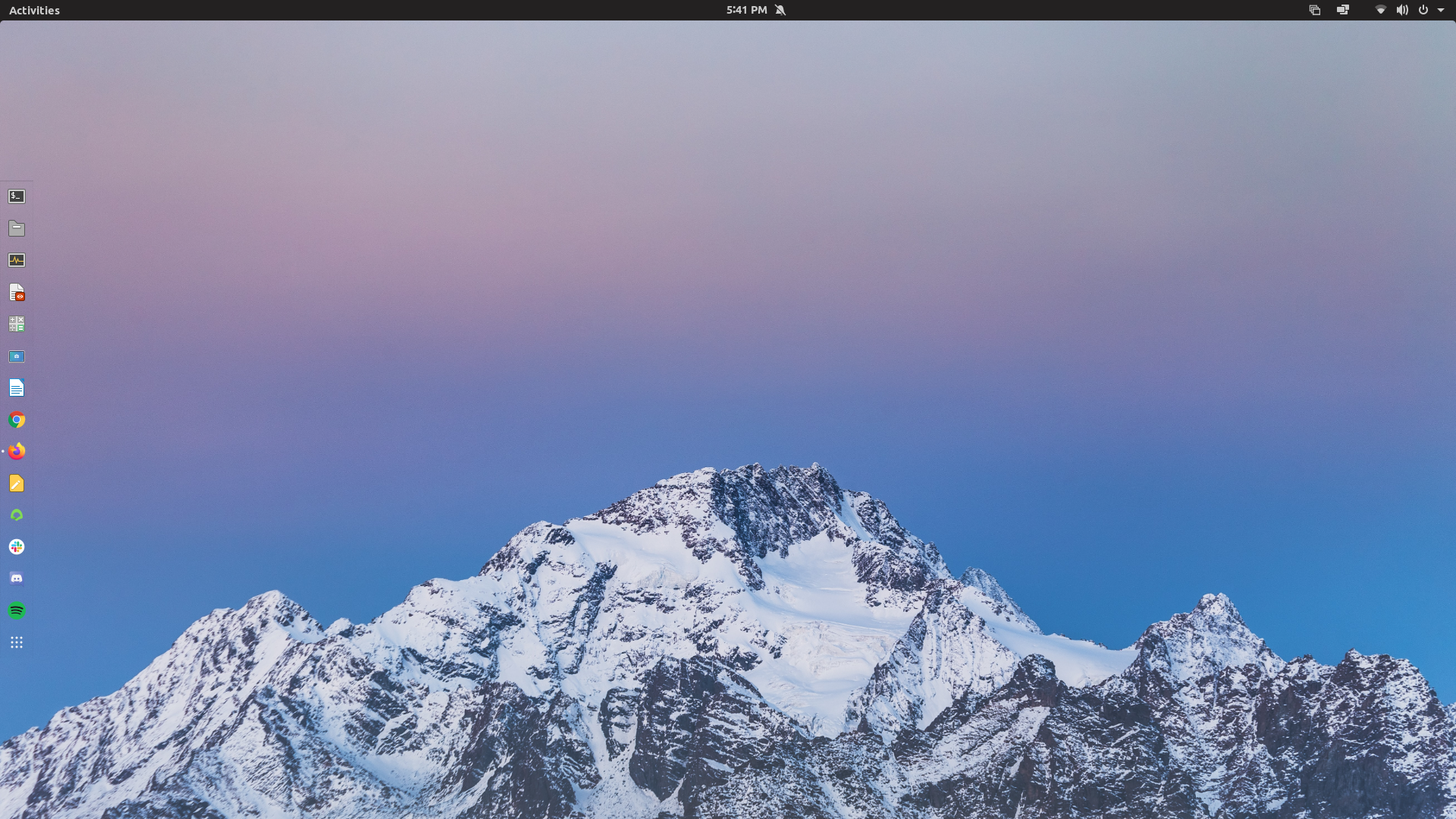 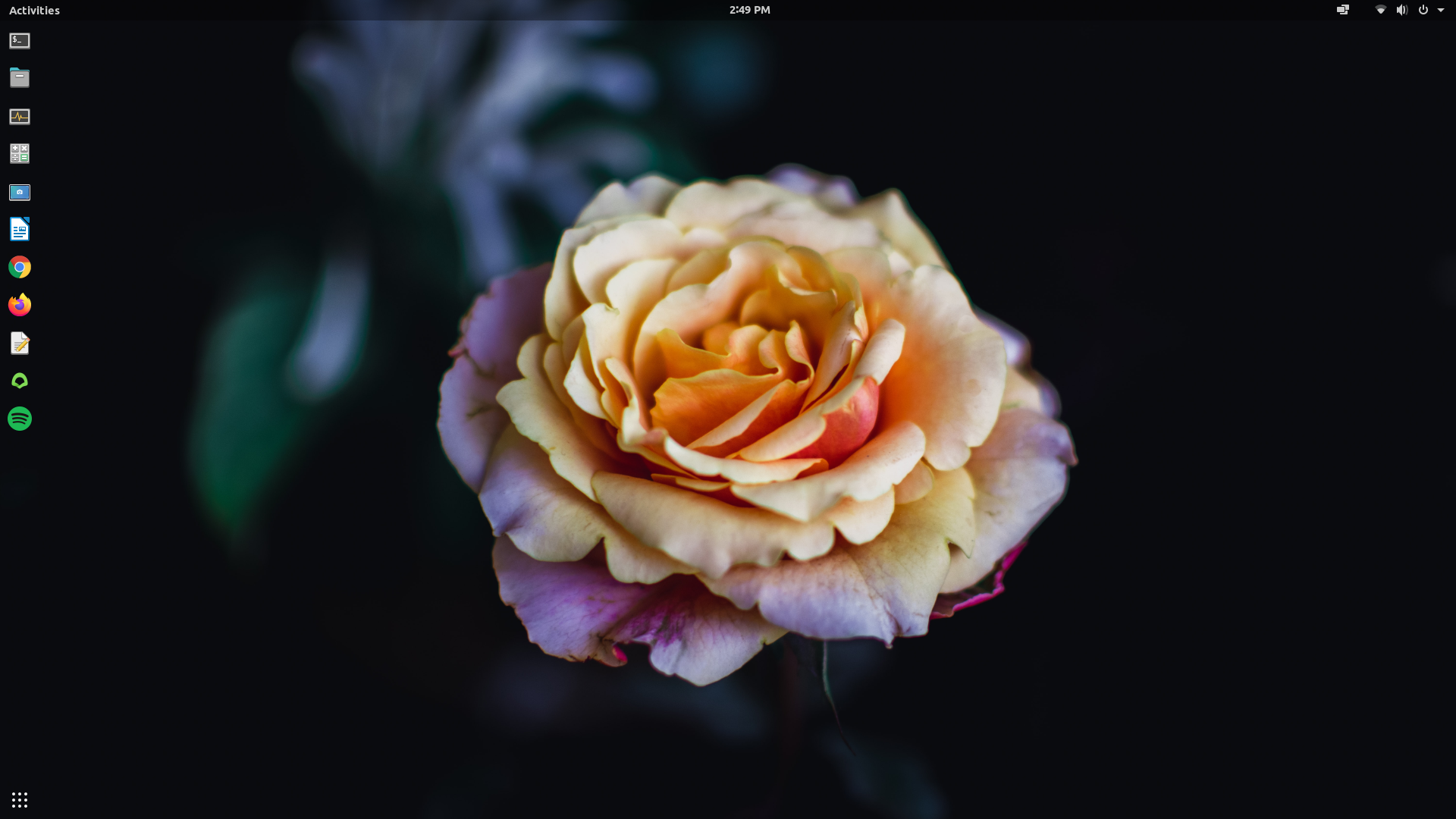 The webpage for this wallpaper no longer exists.

Some things stay the same...

And here we are! This is my current desktop: 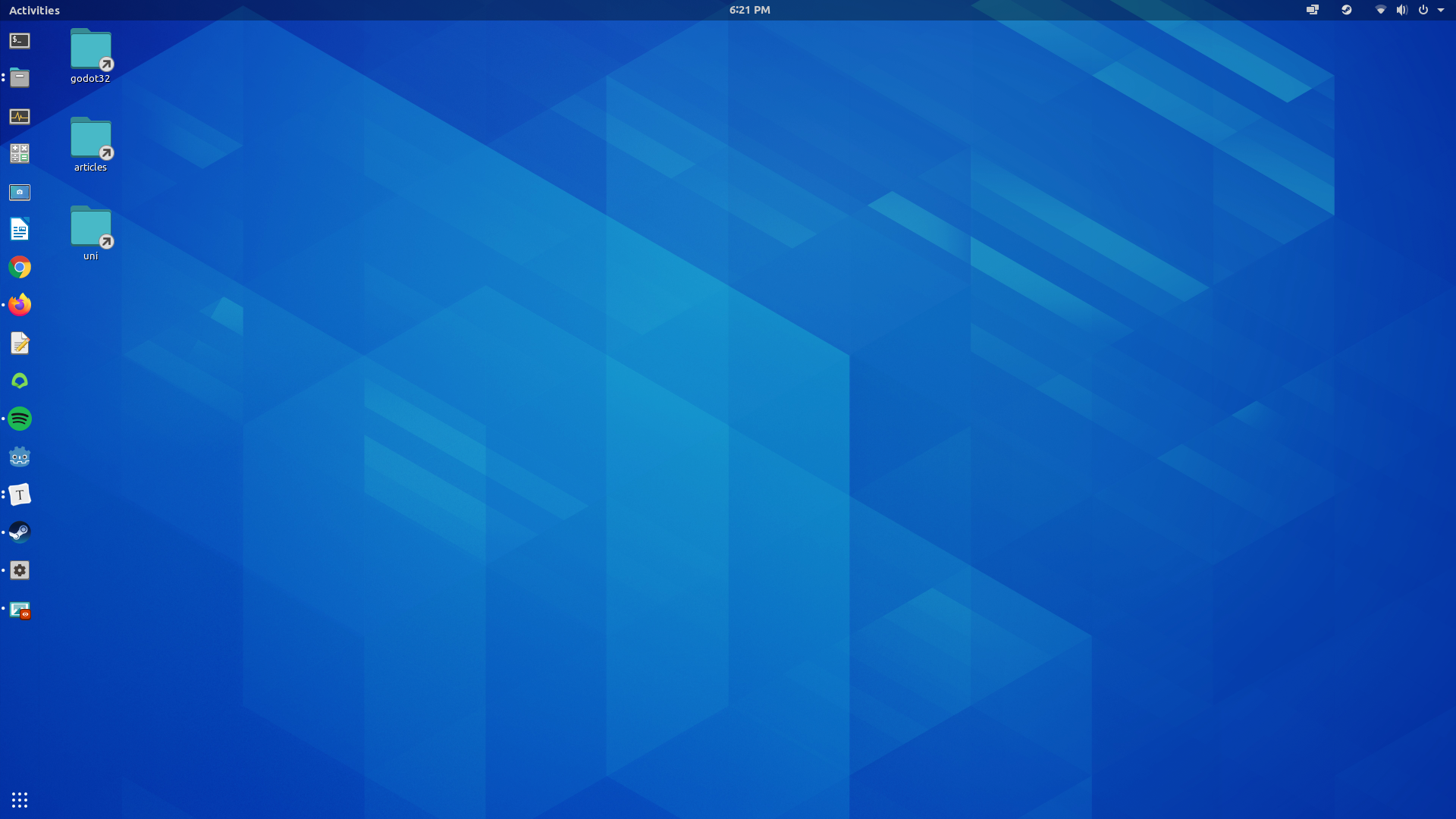 This wallpaper comes with Pop!_OS 20.10. It turns dark purple at night.

Three years later, it appears the echoes of the Unity desktop still have me in their clutches.

I think my distro-hopping days are over. I've sampled most of the DEs and distros. At this point Pop!_OS or GNOME would seriously have to kick the bucket for me to switch to something else.

Customizing my desktop further is a fruitless effort, which is why I'm using default everything and instead dedicate my time to my actual work. Using Ubuntu and Windows is, ironically, the logical conclusion of the distro-hopping journey.

The only distro that I'm still curious about is ElementaryOS. ElementaryOS is like Pop!_OS in the sense that they are also trying to provide a polished desktop experience on Linux. And what can I say? I'm a sucker for skeuomorphism.

Unfortunately, Pop is better for gaming because of their included packages. In general, Elementary is a bit too restricted to make me serious about it, and Pop's GNOME experience reigns supreme. Perhaps in the future Elementary will be better.

One last point: many packages and applications for developing software support Ubuntu first and foremost. It really helps to be coding on the same OS as your server (or Docker container).

Here are my dumb opinions on everything else, just for fun: